My room in a sharehouse, mid-1999: This album had sickened me. I felt my stomach lurching slightly, whilst my head felt heavy and was swimming in a choppy expanse of confusion. A sense of irritation eventually overcame me and I hit to stop button, ejected the CD and tossed it petulantly across the room.

By the time I encountered Wilco’s third album in 1999 I knew their work reasonably well, but it would be fair to say I was still growing comfortable with them. Whilst they hadn’t yet completely overhauled their ‘alt. country’ tag they were still a restless unit, prone to bursts of raucousness and curious diversions. Where my listening tastes were concerned at the time, they certainly held a lower prestige compared to the likes of my enduring obsession with The Complete Works of Elvis Costello, which at the time was chewing up most of my meager spending money. Where Wilco was concerned, I still had my battered cassette copy of Being There and a CD of their collaboration with Billy Bragg (Mermaid Avenue); both of which I really liked.

How to fight loneliness / just smile all the time / shine your teeth ’till meaningless / and sharpen them with lies.

I had picked up Summerteeth in mid-1999 at the tail end of a miserable, depressed winter. Wilco’s frontman Jeff Tweedy sounded especially miserable and depressed across Summerteeth’s 50-odd minutes. The album as a whole broke away from the previous albums’ country leanings and roof-raising rawk, instead opting for what sounded like a fucked-up version of The Zombies’ Odessey and Oracle spliced with The Band’s second album. It’s an album that is at once sunny, yet persistently uneasy – it blooms and glides; then lurches and collapses. In a paisley nutshell, it’s sunny psychedelia tainted by paranoia and loneliness, howling out from the bowels of a K-Hole. Darkness courses through the entirety of this record and for every upbeat respite, there are gut and kidney punches landed everywhere else.

So with that in mind, let’s return to my room in a sharehouse a bit over eighteen years ago. 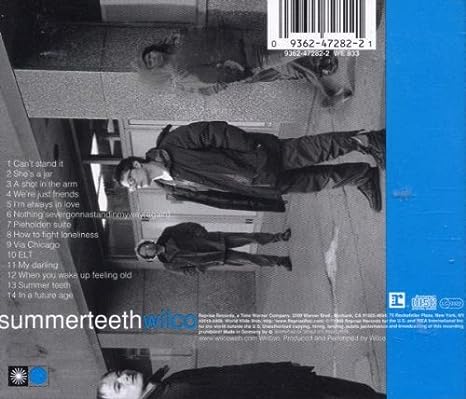 On a quiet night I loaded the CD into my boombox for the first time. The opener, “I Can’t Stand It” erupted from its tinny speakers with the chime of an electric 12-string guitar (immediately reminiscent of The Byrds) giving way to a swell of Mellotron, thumping drums and weary, nicotine-grizzled vocals.

As Tweedy’s refrain collapses into a hoarse scream, before I knew it I was immersed in one of the saddest songs I’d ever heard: “She’s A Jar”.

She’s a jar / with a heavy lid

My pop-quiz kid / a sleepy kisser / a pretty war

You know, she begs me not to miss her

Tweedy sounds even more resigned and forlorn on this song. Whereas on “I Can’t Stand It” he at least sounded like he was being propelled and pushed ahead by the momentum of the song, here he sounds like he’s been buried alive by it, half-speaking allusions of a lover as a jar (or is it ‘ajar’?), quiet front yards, water skies and bruised roads.

But what a gorgeously sad song! Lyrics aside, on musical terms alone this song is utterly sumptuous. A rickety sounding acoustic guitar floats uneasily atop a bed of entwined organ, Mellotron, loping bass and bleats from The Most Lonesome Harmonica In The World. It’s like the tangled undergrowth of the mind at its most charged, poetic and forlorn. A soundtrack for losing your mind whilst surrounded by beauty. Then there’s the rhythm that Ken Coomer lays down: a dour pulse alternating between snares and rim shots, yet totally immediate and forceful – urging the momentum of the song along. A trap kit scything through the cluttered web of the instrumentation and Tweedy’s surreal  lyrics. That’s ‘surreal’ in the Bunuel-lian sense; i.e. whereby the imaginings of the unconsciousness ruptere and manifest themselves into reality by turns discrete, poetic, bewitching and disturbing.

“She’s A Jar” contains probably what is (to this day) my favourite set of lyrics – a staggeringly beautiful and confounding string of imagery; a stream of wild mercury that in my mind is matched only by the terror and beauty of Dylan’s mid-60’s streams on consciousness:

The ones I dream

And freeze to spread skeleton wings

I passed through before I knew you

An unconscious reverie committed to song. It’s so gorgeously vivid and unsettling.

But before we become too lulled by the twisted beauty of everything in this song, the lights shut out suddenly in the final seconds of the track. It consists of a reprise of the song’s opening lines and a tweaked revision the final line. Where Tweedy had previously sung, “you know, she begs me not to miss her”, he swaps it with this:

She’s a jar / with a heavy lid

My pop-quiz kid / a sleepy kisser / a pretty war

You know, she begs me not to hit her

Tenderness replaced by a brutal and confronting confession.

It’s not an exaggeration to admit that I felt physically ill when that fucked up line landed. It ruined everything. Slightly distressed, I hit pause on my boombox, dug the lyrics sheet out from the CD’s jewel case and corroborated what I thought I’d just heard.

Reluctantly, I restarted the CD. The gurgling synths opening “A Shot In The Arm” made me queasy, not to mention the chorus’ refrain where Tweedy longs for “something in my blood, bloodier than blood”.

Whilst I didn’t skip through the rest of the tracks, I was too rattled and sickened to acknowledge the rest of the album as it lurched along. Barring a couple of sunnier, hopeful moments, once “Via Chicago” rolled around it was all over for me:

I dreamed about killing you again last night

And it felt all right to me

Your cold hot blood ran away from me to the sea

As the zombied closer, “In A Future Age” petered out the CD was (r)ejected and put back in its case. A couple of weeks later I sold it back to the record store and bought another Elvis Costello reissue. A couple of years would go by before I heard the album again.

When I was eighteen I didn’t understand depression. I was living with it, but I had neither the ability to comprehend it, let alone articulate it. I would instead regard my perpetual melancholy and social anxiousness as just something that happened when you were at this part of your life. It was my belief that this permitted you to cry for no reason and be perpetually angry at or feel hard done by the world. I never really regarded it as depression because that term scared me and had all-too-dramatic connotations with padded cells, electric shock therapy, slashing wrists and throwing yourself off buildings. I couldn’t decouple these things from what actually happened in real life and I figured things had to get really bad before I ended up in one of those scenarios. ‘Depression’ was a tag that I didn’t want dangling from me and on show to the rest of the world. At this stage I hadn’t been diagnosed with depression or prescribed any medication, so in lieu of professional intervention I wallowed in undiagnosed and romanticised misery.

From this unfortunate position I should have been able to relate to where Jeff Tweedy was coming from across the emotional massacre of Summerteeth. This guy feels like shit; I feel like shit. It should have clicked. In previous years, my high school friends had been into all sorts of tormented and transgressive music that sounded and read on paper ten times worse than anything Tweedy could dream up. And it’s not like I wasn’t partial to such indulgences – Nick Cave and The Bad Seeds’ Murder Ballads looms large.

So what was the issue? As a songwriter, Jeff Tweedy’s always had a knack for earnestness and sincerity in his writing, regardless of whether it’s literal, a collision of surreal imagery or a deft combination of the two. Dylan and Neil Young have a similar impact – regardless of a given song’s clarity or impenetrability (“Visions Of Johanna” and “After The Goldrush” come to mind) they are delivered with such potency (and sonic pixie dust) that some kind of emotional wallop is inevitable regardless whether you understand exactly what the fuck they are on about.

Back in 1999, that emotional wallop was also inescapable when I listened to Summerteeth for the first time. I couldn’t however get past the effect it had on on my stomach before it could get anywhere near ruining my heart. The blood, guts and bruises alluded to in Summerteeth felt so much more grave, horrifying and real than Nick Cave’s trail of dead on Murder Ballads simply because Tweedy’s experiences felt genuinely real, whereas Cave’s come across as B-grade schlock cribbed from folk tales. Chalk and cheese; Tarkovsky and Tarantino.

I’m fairly certain that Tweedy has never murdered anyone (“Via Chicago”) or committed acts of domestic violence (“She’s A Jar”). Tweedy has however suffered from depression and substance abuse and this was channeled through Summerteeth when things were especially in the ditch for him. To Nick Cave’s credit, he too has produced fine work when life was at its most shit and it should come as no surprise that in the same year that Summerteeth blindsided me I encountered his 1997 album, The Boatman’s Call.

When you’re depressed, horrible things come into your head and if you’re creatively minded you have to splatter and frame them somewhere. If you’re a good songwriter (as Tweedy is) you might be able to transcend clichés and plumb the depths of the poetic. Rather than simply dismissing Tweedy as a murderous misogynist on the basis of those two songs, when Summerteeth eventually clicked for me a couple of years later I read these songs as painful, yet articulate expressions of alienation, misanthropy, loneliness, regret and shame. It’s an album suffused with this stuff – the rough contours of existence.

Emotional maturity and intelligence is critical when dealing with this kind of work. This is primarily the reason why Leonard Cohen’s still mistaken for a wrist-slashing sad sack, when in actual fact the melancholy and torment isn’t always a literal reading of the artist’s state, especially when it’s accompanied by daubs (or smears) of humour, self deprecation and – in some notable instances – outright piss-taking.

When I first heard Summerteeth I simply wasn’t ready for it. I wasn’t old enough for it and the weight of the world, which was crushing me made it too difficult to bear and appreciate fully. That said, it’s still an album that’s been with me since I first heard it. It left an impression on me, so shocking and profound that my body literally rejected it (I think throwing the CD across the room counts here). But when it did eventually creep its way back into my life, it seemed miraculously compatible with everything going on with me at the time. Sure, I was still depressed but thank goodness I was a little smarter!